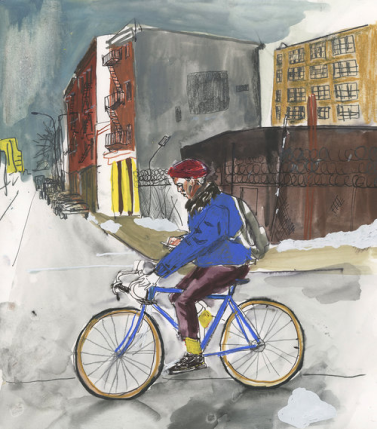 I have been off blog the for a while. Very busy, but here I am finally. Just finished these windows for Browns on South Moulton Street and Sloane street.

Silk is big in Browns this coming season so I wrote 2 little stories about the 4000 year history of silk and did some images based on them. These are the pics and stories:

It was the sudden shift in the direction of the wind that day which upset the small white cocoon, precariously balanced on it’s leaves into the tea cup of Lei Zu who was sitting below it.

Lei Zu had spent many hours undisturbed in the shade of this white Mulberry tree, with it’s bent trunk and gnarly bark, so this disturbance did not cause any annoyance. Instead, it rather sparked her curiosity.

She plucked the cocoon from her cup and so happened to catch some of it’s fine thread. She began unravelling. It was the finest and longest thread she had ever seen, so fine she could barely detect it between her delicate fingers and it occurred to her that should she make a gown for the Emperor, her husband, it would be the finest gown ever seen.

Within a year she had grown her field of white mulberry trees, and white moths.

The Emperor’s gown had, indeed, been fashioned from the finest and most beautiful fabric ever seen, then or since.

China kept her secret for 2000 years, for anyone found with the eggs of the silk moth, the moth itself or the Mulberry Tree was put to death. Only the fabric travelled the arduous silk road, and it’s secrets were all locked inside the fine thread.

The Princess had long black hair which had never been cut. It had a sheen and thickness that was hidden from the eyes of others with an elaborate headdress woven with great skill by her servant girl, it was heavy with pearls and jade.

It was time to leave her homeland and travel to her Indian prince. She hoped he would please her, for she had never seen this future husband.

After her servant had finished combing, pinning and binding, after all her servants were gone, she took, with great care, 10 silk cocoons. The princess pushed them into her headdress. Her heart beat hard against her chest.

Following the silk road for weeks, through the Gobi dessert, past the Himalayas, and crossing the river Ganges, with only the land and the sun by day and the star constellations by night, silk, China’s most coveted secret had escaped.