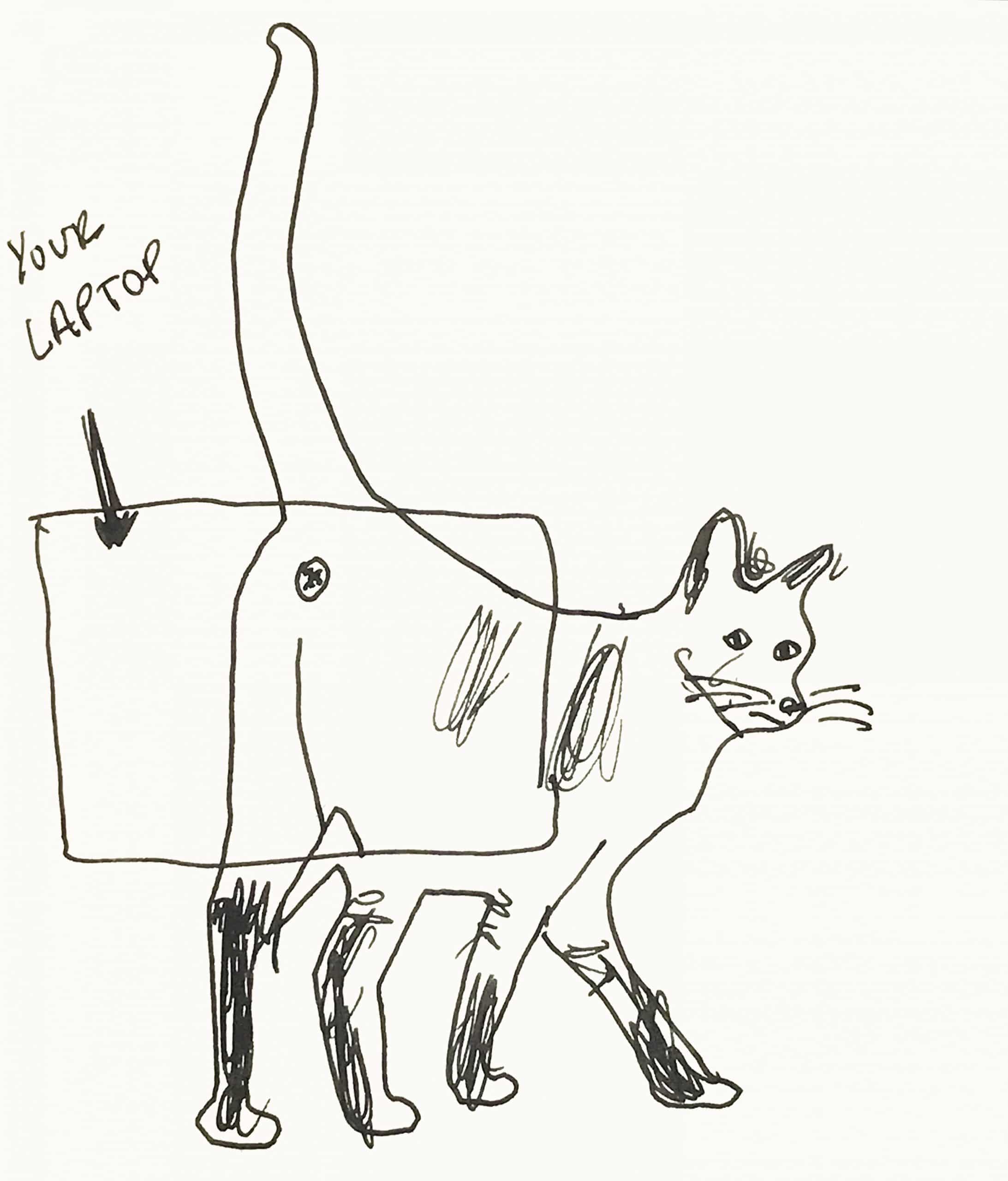 It’s not even mid week yet.

My eyes are heavy and I am thinking about having a lie down. This thought is up in my face like a 3 year old begging for sweets at the supermarket tills.

I have just come out of a meeting, where I was told to give advice, and when I did, I realised it was unwelcome. A cat’s bum hole came rather close to the camera on the laptop at some point. It is probably the closest view Ive ever had of one. I won’t go into detail, but I sketched it in my note book for you.

I see I have new messages in my InBox, but they don’t look important. This compels me to turn away and pick up my phone;  to scroll through Facebook. Eyes burning. Fighting sleep. FB tells me that the sun is shining at the local farm, and the farmer has a new warm hat. He likes the colour, he says. Also an old boss from 17 years ago has posted a glorious photo and accompanied it with the information that she is too warm. (On a beach somewhere very far from the East Midlands.  Tropical. Palm trees and the like.) One of those complaints that is not a complaint. Like “Im tired from shopping.”  That moves me onto Instagram: I have a new follower who posts screenshots of Mediocre level Strava runs, and also of plates of food including one shot with 2 tins of spam, and some paperclips made to look like the DNA double helix, and some fruit styled like a smiling face. All in one shot. The comment says “I am running faster when I eat more fruits.”. It seems to sum up how perfectly non sensical everything is seeming today, under this mid winter slump I am having. Scroll down a little further, and Someone’s Mum is at Tate Liverpool. She is smiling. Its sunny there too. Someone else has tried a new IPA and they really liked the taste, as well as the artisan label. I put down my phone.

Still I am tired.

I am supposed to writing a short critique of a module and how I would improve it, using specific theory models around  engagement and participation but the buzzing of the radiators upstairs is compounding my need to shut my eyes urgently. The clock in the kitchen has started ticking more loudly than normal. It’s 3:18 pm and the house at the back of my garden has the last of the sun at it’s tip. It’ll be gone very soon.

I try to think about how I can possibly cram what I have to do today into the rest of the week, as deep down, now Im working from home, I know what I have to do. I can think of nothing else. I want that bed. To dream of other things. Like being too hot on a beach, perhaps. And fake complaining about it on FB.

My impulses win. I cannot keep these eyes open. And the looming tasks are making it worse. I climb the stairs, open the bedroom door, my partner, who is working in the bedroom looks at me a little confused. I get into bed, cover myself with the duvet, and lie there thinking about all the work I’m supposed to be doing. He gets in too. “Good. Plan” he says. We spoon. And doze. Neither sleeping nor working, but somewhere in a hinterland between the two. Eventually  drifting off for a while. I dream I am working, until an eBay notification on his watch pings me back into the room. The sky is a beautiful dusky Lilac.

I stare at the ceiling. I left the ceiling Lamp on. The light is more orange than I intended it to be.  It lights up the 1970’s ceiling, Artex., like the soft peaks on a Christmas cake. I can hear his heart beat in his chest and I absent mindedly sing (in my head) the Microsoft Teams ring tune, as a slower version, in rhythm to its beat for about 10 more minutes.

I’ll be better tomorrow. I promise. I have to be. I have a 6 hour meeting on Microsoft Teams ay 10. Ill wait for them to call me in, with that ringtone again. The one that I can sometimes hear in  the dead of night when everything is switched off, like Microsoft’s very own brand of tinnitus.

But the sleep did me good.

I wonder how many other people are going to have one today.